-To protect the original edition, all the books of the Vishnuh-Society
placed encrypted and shortened on this site (see the book “Only
Nature lives forever.”)

Thus says the doctrine of “Vishnuh”:

Nature is the creator of life, credit where credit is due … 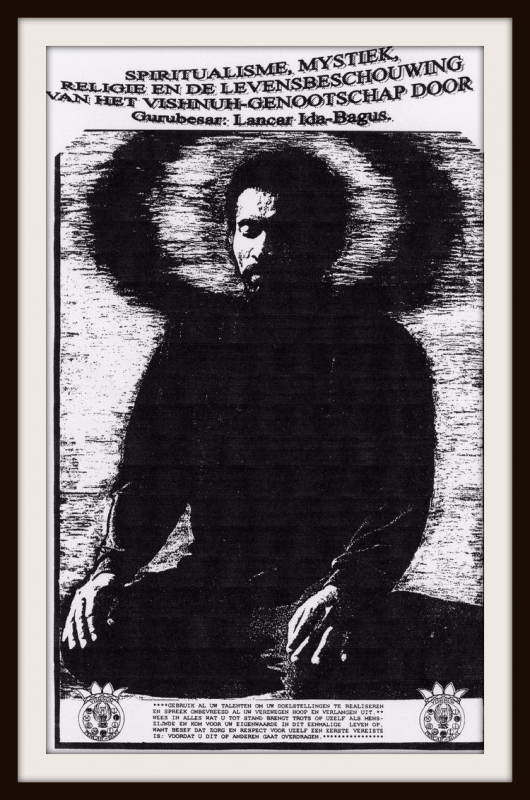 Spiritualism, Mysticism, Religion, and Worldview of
the Vishnuh-Society

I greet you, ladies and gentlemen, girls and boys:

… my name is Ida-Bagus Lancar and I am Gurubesar, professor and priest of the Vishnuh-Society.  I did not come to the Netherlands  (Europe) to preach religion or to be believed, but to restore the name Pencak-Silat, to settle me and telling the story of my ancestors (= the Vishnuh-Society) to the mass.

Thus says the doctrine of Vishnuh:

“It is better by noble boldness to run the risk and undergo half of all evil than to stay out cowardly and lethargic of fear of what will happen.”

….I will give you a brief summary of Spiritualism, Mysticism, Religion and the “Worldview” of the Vishnuh Society.

….Spiritualism, mysticism, and religion are concepts that are often confused and often used interchangeably, but there are indeed differences in the meaning of these words.

…  The Hindu-Buddhist Vishnuh-Society has for centuries watched the world and recorded the events of the past in so-called “lontar”, made from the dried leaves of the lontar palm. The society has always been independent, so the writings retain their original shape and have never been corrupted by third parties or rewritten. The Vishnuh-Society knows the history like no other.

….About 9000 years ago, this association was founded in Sri Lanka by Vishnuh, a normal human being of flesh and blood.

In that time they confessed there animism, for example, they worshiped a plant, a tree, an animal or a stone which one owed his survival, or in which the people recognized their ancestors. Hinduism, as we know it today, did not exist.

….When the river was called the “Indus” discovered, the people of India named this river “Shindu.” The people of the neighboring country Persia which invaded India at one point, could not pronounce the -S- at the beginning of the word and named the river “Hindu”, the people behind it lived in the Indus Valley, was called “Hindustani”…

… Here arose the “Hinduism” and also the person Vishnuh was mythologized through the centuries and added to the hundreds of gods of Hinduism.

But Vishnuh was not God himself, he was not a believer, he was, in fact, a “Hindu-Buddhist, a ” liberal ” of the empire after the Indus River, because” Buddhi ” is Sanskrit for ” liberalism “…

… The ideas of the Vishnuh-Society is not based on religion, but a spiritual foundation.  The priests of this society are not preachers of God, but professors in the combat doctrine and spiritualistic science of the “doctrine of Vishnuh”.

… The word “priest” originally means “spiritual representative” and is composed of two Greek words namely 1 “presbyter” meaning elder and servant, And the 2nd word is “presbuteros” meaning a member of Parliament or leader of a “polis (pl. poleis” = greek hill town.)

….So the term “priest” has traditionally nothing to do with religion, but with the “leadership” in general, for the king, or the headman of the village, or the head of the family, was also a priest.

Later Christians and other religious groups in global terms take over the term “priest”, denoting their ecclesiastical authorities.

… The priests of the Vishnuh-Society titled as “Gurubesar”, “Gurubesar” is Sanskrit for “professor, heir and spiritual representative”, so even a priest, given the many spiritual subjects include the teaching of Vishnuh.

The Worldview of the Vishnuh-Society is not God the creator of life, but that life is a gift from nature shot of water and the purpose of life is to sweeten life for everyone.

Nature has created itself through its own natural strength and has ever developed a prototype of every living being, with the instinctive tendency to conserve the species…

… Not God created man in his image, but Nature has created man and man created God in his image! Also, heaven, hell, reincarnation, devils, and angels were created in the imagination of the religious man.

….Body and mind are one and both of material nature, the spirit atoms control the atoms of the body.

The individual spirit lives of the supermind, this is the air, because the difference between life and death is the breath…

… Every living creature eventually goes the way of all flesh, that is, that the individual mind is lost when the body dies because the mind is inseparable from the body.

The man lives after death only continue in the memories of the survivors; in memory; so obituary.

….There is no God nor heavenly paradise, or Valhalla, or Nirvana or hell or something like that, which man gets or can live on after his death.

….Many claim to have supernatural mystical powers, but this is actually nonsensical because all phenomena are natural and everything is explainable. That the human mind has certain abilities is an established fact.

… Unfortunately, few people learn to use these powers well.

… The Vishnuh-Society is not a sect because a cult is a group of people united around a religious idea or a religious leader figure, usually as a partition of a larger religious movement.

….The society draws its inspiration from the life and the knowledge that her ancestors have amassed. However, the Vishnuh-Society is open to anyone who claims to be inspired by gods or to be God himself because we must respect dissenters, as long as this person also respects every man according to his humanity.

Unfortunately, history has shown us time and again, that evil people use their religion as an excuse for arrogance, greed and cruelty and religion fueling their malice.

….The word religion is derived from the ancient Roman “religio”, which essentially means to pay close attention to the sacred and the supernatural. In Dutch, religion is synonymous with the “worship of a god.”

….Around the 6th century BC traveled from the Indian nobility “Siddhartha Gotama” to China, there to preach his philosophy verbally, his learning initially nothing was recorded.

He was also a Hindu-Buddhist (a liberal Hindu), and asked his followers explicitly, for after his death, not to deify him. But 200 years after his death, his person was mythologized and his learning in bastardized form was chronicled. In those writings, he was presented as Buddhi-dharma (literally meaning: Religion-is-liberal.), Abbreviated as Buddha. So the original Buddhist spiritualist doctrine changed unfairly in a religion.

….Christianity is rooted in Judaism. Similar to Vishnuh, the ancestors of the Hebrew people, this includes Abraham, Isaac, Jacob, and Moses developed specific survival learning and life philosophies for their people.

Degenerated portions of this learning centuries later incorporated into what Christians call the Old Testament and the New Testament.

Only very few writings of the Hebrew original teaching is preserved because the Hebrew people is almost always suppressed and forced into slavery.

Therefore they set the local religious authority for the Jews (which was originally a derogatory term) in the hands of the Sanhedrin (which was a governing body and court), where 71 Sadducees and Pharisees (mainly scholars and laymen), led by a high priest formed the judiciary.

….Jesus of Nazareth was a kind of Robin-Hood figure, with his disciples, which means “nonviolent followers”, he formed a gang of robbers who stole bread at night from the rich to share with the poor the next day.

In Helios, the arid plain where lepers, the mentally ill, criminals and other, useless to society people were exiled to, Jesus was a welcome guest.

Helios also attended Satan (= Greek for bad guy), he was a native dignitary, who was banished there for his crimes.

He was the leader of a gang of demons it means “violent followers”.

….When Jesus of Nazareth sitting on a stolen donkey and with a large following on his way to Jerusalem, he was betrayed by an infiltrator of the Sanhedrin named Judas Iscariot.

Jesus was found guilty by the Sanhedrin to “blasphemy, theft and popular sedition” because he was a threat to the authority of the Sanhedrin.

The high priest Caiaphas condemned him for these crimes to “Crucifixion until death follows it.”

….Through this kind of punishment, the Pharisees in the Sanhedrin kept their influential authority and enforced in this manner their reverence for God Almighty.

Two hundred years later, Jesus who was also a non-believer, was mythologized and confused with a Yogi from India and philosopher “Jesu bin Pandera” who once traveled to Judea to preach his life philosophies there.

“Jesu di Pandera” so impressed the Hebrew people, that they named their children after him.

When the Bible was written, these two mythical figures merged in the person of Jesus Christ.

….”The Holy Scriptures of the Christians involve a cluster of myths, legends, chronicles, historical events, and philosophical beliefs, which are derived from, among other Hebrew, Indian, African, Greek, Roman, Celtic, Germanic and other indigenous peoples.

Especially the parental strain teaches from the Germans the sagas of Wotan and Frija mingled with the beliefs of Christianity when the Vikings are violently dispersed over most of Europe and turned to this belief.

During this time the religious societies arose, who collected all these errant knowledge and gave shape in the form of the Bible.

….The word “Bible” comes from the Greek “biblios” which simply means “book or scroll.”

Moreover, each Gideons have their own version and interpretation of the “book” for each people who have converted by the religious societies, they have the indigenous folk at its discretion woven into their Bibles in order to perpetuate the faith.

Therefore, the Catholics, the Protestants, and other sects all have a different version of the same Christian faith and belief.

Similarly, Islam is only an extreme offshoot of Christianity.

….That religion and religious organizations up to get the worst of man also appear all too well from the histories of the Roman Catholic Inquisition, the witch hunts, the Crusades, the Jihads, and other nonsensical Holy Wars.

One can state with certainty that discrimination and racial hatred find their source in religion, as in early Christian art are pious people white and pagans black.

….Life is a gift of Nature. One should thus not to argue, but rather life more pleasant for everyone. Love your neighbor, because every human being is equal and has the right to life.

Therefore, people dare to stand up for yourself and live, because there is nothing there above, and if there is a benevolent power … or something up there, man can as yet know nothing.

Without God, man will live anyway by the generosity of Nature.

…. Says the doctrine of “Vishnuh” about all this:

“We Are not anti-God, because how can we be against something that does not exist and has never existed?

But if there is such a thing that could exist as a God we would certainly not a pro, given the many crimes he committed against humanity and the living Nature.

We are warriors and not delude ourselves, because we are creatures of the miraculous nature and realize that Nature is the only benevolent creator of all that was, of all that is and all that is to come… 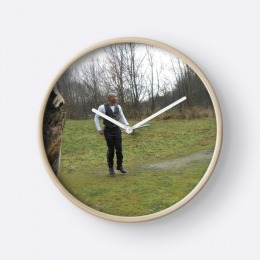 ….Know and let know… no one happens to become wise, because wisdom does not come from the East, West, South or North, but wisdom is born from one who is honest with himself and to his fellow man. Anyone who is well disposed of Vishnuh has the ability to be well-disposed towards other living beings. Everyone has the right to life, freedom of expression and self-preservation. “

So far this brief summary of spiritualism, mysticism, religion, and philosophy of the Vishnuh-Society. 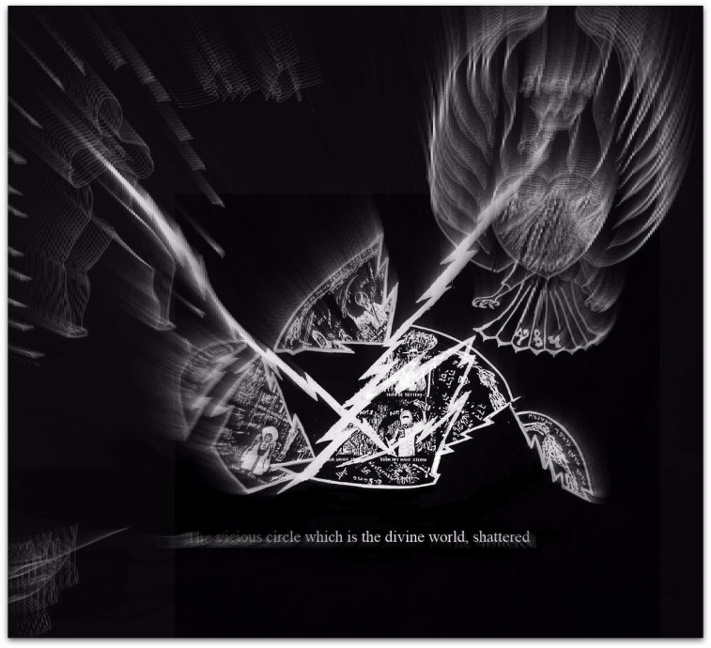