To protect the original edition, all the books of the Vishnuh-Society placed encrypted and shortened on this site

The goals of the Vishnuh society.

Good day ladies and gentlemen, boys and girls. It is a great pleasure for us to give you an explanation of the teachings of the Vishnuh-Society, its history, and what our philosophy of life is, and why.

Hopefully, there will be some people among you who are attracted to our society and interested in the practice of spiritualistic sciences.

But maybe there are also some among you who are disillusioned with our stories and feel insulted. Let me reassure you, those feelings are misplaced. The Vishnuh-Society respects every honest man as long as other people also respect dissenters.

We make it our goal, to sweeten the lives of everyone, so it is not at all our intention to talk to someone to hurt or unfounded guilt.

But you’ll probably wonder why it is necessary to rekindle all those painful events from the past. What’s done is done. We need us not be ashamed of the atrocities that previous generations have committed? Can not we just forget and only look ahead, or pray and trust that everything ever will be okay?…

… No… Many of the current social problems have arisen from the mistakes made by European ancestors. By studying the past, their progeny will be able to better understand the history of the problems in their society.

This historical awareness will enable them to control these problems and to look for solutions in a more focused way.

They can then, for example, prevent them from repeating themselves and can give a positive turn to the negative and destructive ideas from the past and convert them into constructive plans. They should not wait, but work on a cozier and juster society, preferably in this life and on this planet.

To illustrate this, how to put negative forces into positive forces, one can make use of our developed society liberation Amansio game.

This game is a miniature version of how slaves were chained together in the colonial time. Imagine, men (pregnant) women, and even children received from their cruel masters a metal ring around the foot or around the neck. This ring was riveted on a long chain. At the other end of the chain, there was a larger ring, which was mounted in a special manner to an approximately two-foot thick iron bracket. The slaves had this bracket lug around everywhere. The bracket should be moved only when the slavers instructed to do so.

… Men and women were separated from each other and could not have intercourse with each other, except when the master needed new slaves. The strongest men were then used as sires.

As a slave died of hunger, thirst, and exhaustion, then became the foot or head simply cut off so that the bracket position became vacant for another slave. When the priests of the Vishnuh-Society saw this disgraceful practice first in Africa and later in South America, they felt obliged to free the enslaved Africans and Indians (indigenous peoples)from their cruel Christian masters and their heavy chains.

The Vishnuh-Society had discovered the system that loosened the chains from the heavy bracket so the slaves were able to run faster without this impediment. This chain system was originally so a degrading and destructive tool, but the Vishnuh-Society has a positive spin on it by converting it into the form of a useful but entertaining game. This game can be used as a warm-up for the brains, to prepare for spiritually intense work, the game promotes circulation and coordination between eyes and hands.

The slaves were mostly freed at night because there was no light in the slave stables, unleashing had to be done by touch. The game is also suitable for the blind. But Amansio is above all a memory game, partly because you have to remember which ring you have to pick up the bracket and because it reminds us of that terrible time of European world domination. 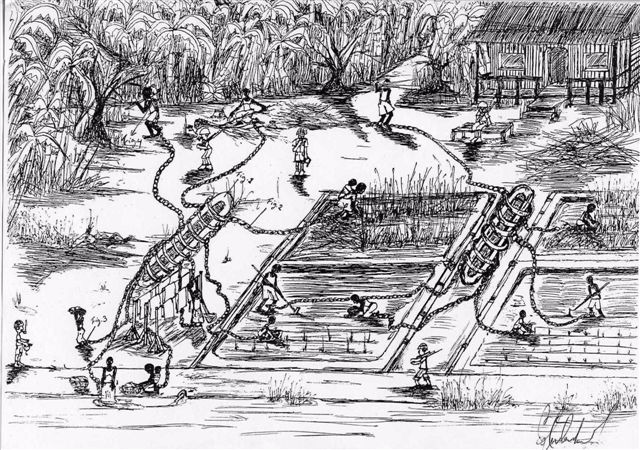 Although slavery and apartheid were abolished almost everywhere, the world is still not cured of the disease called colonialist imperialism.

For more than four hundred years, it has spread to all continents and it will certainly be many generations before the oppressed peoples of the past completely recovered from the trauma they have suffered throughout the centuries.

In almost every country that used to be a colony, the traces of oppression are still evident. Abuses such as famine, illiteracy, overpopulation, pollution, and deforestation have arisen because the indigenous peoples kept stupid for centuries so that they were dependent on their rulers.

… When the colonies became independent, most were again faced with a dictatorial and corrupt rule and large class differences were a small group of very wealthy ruling over a very large group of people who can hardly provide the primary needs.

Their leaders have in fact copied from the colonialists and especially acquired theirs bad manners.

Europeans need to realize that they have all the luxury and comfort they enjoy here in the West, mainly through the exploitation of distant countries and peoples, and still today.

I will illustrate this with three examples

1.    They pay the poor people a penny for a handmade shirt that they sell here for fifty euros.

2.    They provide development aid to countries where the population is just not starving, but they do demand that they can buy a portion of their harvest at a low price so that they can process it again in the feed of their cattle.

3.    Especially in the Netherlands, it is investing in the development of environmentally friendly production, but the old polluting machines are sold or donated to developing countries with ulterior motives.

…. In fact, the western countries are still benefiting from their former colonies, only now they leave the dirty work by others. The role of the oppressor is outsourced to members of the indigenous people. And in order not to feel too burdened the West provides development aid under strict conditions, but this conditional aid is not much more than one of our own cigars.

In the history lessons at the European schools and Colonial Time is not or hardly treated. The times it comes up is spoken admiringly about the brave sailor who at the beginning of the “Golden” seventeenth century, the first Dutch colony founded in the East. However, it does not explain that he had burned down an entire city first.

… But if they stopped this idealization of colonialism, if they would no longer trivialize the crimes committed by their European ancestors, and if they still dare to face the injustice that still continues today, then they and the generations after us will have a better understanding in the causes of the big world problems and a greater chance to find suitable solutions.

The Vishnuh-Society’s commitment to helping the progenies of the formerly oppressed peoples to regain their self-esteem and to recover from the disease called “Colonial Imperialism,” by telling the story of their ancestors, that their ancestors are itself could never do.

Hopefully, our readings enlarged your mind somewhat and given you some food for thought. Maybe you are a bit overwhelmed by the deluge of information and you have no idea what’s already been told.

However, if you have no need for all of this, I hope that you will continue to live with a positive feeling and that our loving message has reached you anyway.

… On behalf of the Vishnuh-Society thank you very much for your attention and I wish you a nice day.