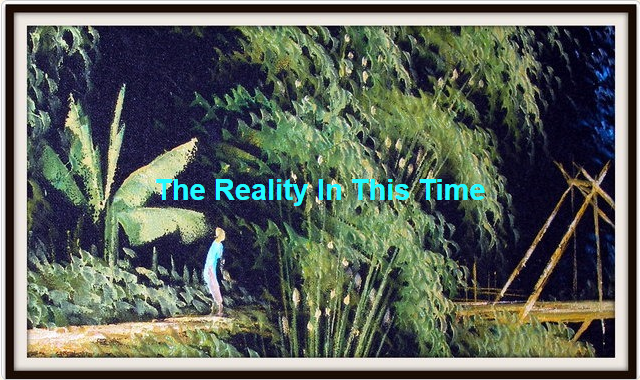 *** IN THE REAL HUMAN LIFE, MAN MUST BE HONEST WITH EACH OTHER. EVERYONE HAS ITS OWN VIEW WHAT NO ONE ELSE HAS.***

A. The Vishnuh-Society has no respect for any religion, for how can it respect religions that invented hypocrisy, lovelessness, genocide, discrimination, oppression, and selfishness?

B. In addition, the Vishnuh-Society has no respect for institutions that consolidate and spread religion.

… Nor can it, for humanitarian reasons, respect the religious institutions that have promoted submission, domination, unscrupulousness, and division since time immemorial, and brought misery and discord to mankind, as well as the causes of and even today wars, popular hatred and genocide, and all kinds of human rights violations worldwide on behalf of their God.

C. Furthermore, the Vishnuh-Society has no respect for people who regard their religion as their cultural heritage, because these kind of people consciously or unconsciously support misery, cruelty, war, caste system, poverty, and oppression.

… Therefore, for obvious reasons, the members of the Vishnuh-Society cannot love people who consciously / or unconsciously keep their offspring stupid in order to cover up their backwardness in a haze of piety and ancestral tradition that will undoubtedly degenerate into misery for their descendants and for fellow humans.

Furthermore, the Vishnuh-Society of the under A, B & C cannot say anything about “letting them in their value”, since there will be false value. And anything contrary to humanity is worthless.

But the Vishnuh-Society has great respect for all living beings as part of the wild nature.

… The Vishnuh-Society prefers to say everything honestly and sincerely and cannot be hypocritical towards fellow human beings. 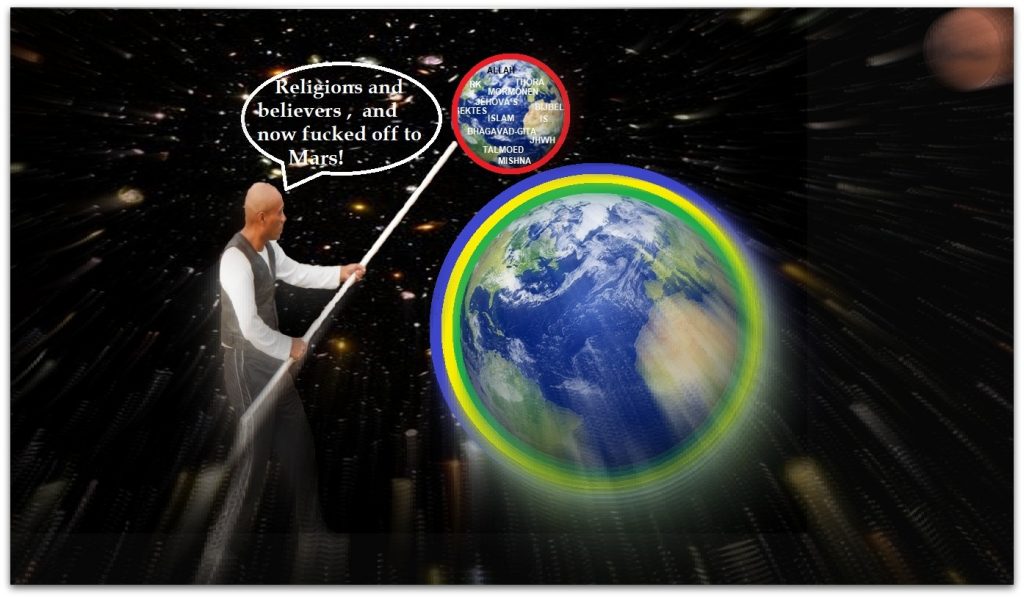 The believing world is on its way to the planet Mars.

“For whoever respects his fellow human beings will always say the things they are because it is a big crime to keep back and to mislead fellowmen.”

… This, because the Vishnuh-Society does not pay attention to the way in which religion deals with respect towards dissenters since religiously related organizations/ institutions/ churches and also the malignant people with religion have shown worldwide that they do not understand what respect means.

… So these institutions have never had respect.

On that basis, the religious world cannot respect one another. This, because of the “religious curse” or “original sin” that persists and is incarnated in their ranks. Look at this for the religious misery of the past and its transfer to the present.

History has shown time and time again that when respect was expressed in the past by the Church and the hypocritical religious people, it turned out to have been false respect.

… This, because those who have waged wars and misled fellow humans in the name of their god-fiction, disadvantaged or massacred fellow humans through the ages to become number one in the future, are unreliable, and cannot be trusted in all times. 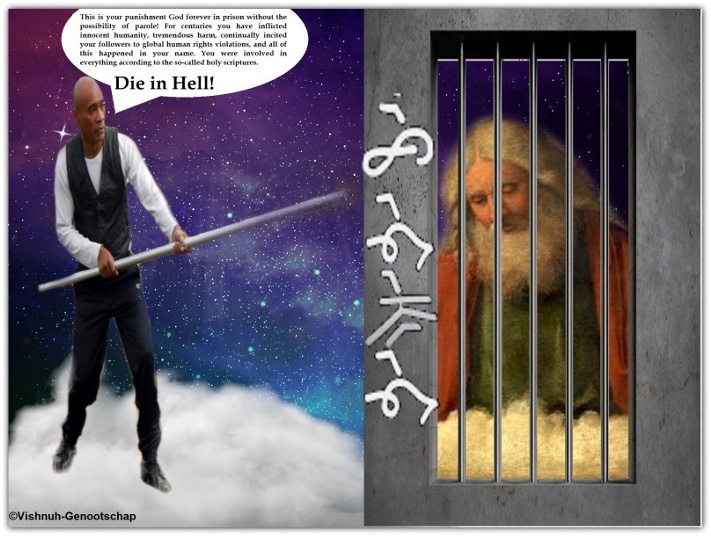 God is living here right now, behind the bars.

These kinds of evil people and institutions will repeat their evil plans in many ways. Today, many present themselves in all kinds of charity faces with their seemingly peaceful intentions and thus their malice surrounded by an optical illusion, so that fellow human beings can no longer distinguish between good and evil.

… And they manifest their so-called humane behavior precisely in those far-underdeveloped countries where their ancestors once horribly raged against the oppressed poor population.

Thus, those countries in question are recolonized by the descendants of the former people’s murderers and oppressors under the guise of peace and humanity.

… Today’s religious humanity has all deployed social tactics to convert the underprivileged peoples and innocent humanity to its belief in God.

… Money can also make people believe in evil things. Because of this, these two extremes, “good” and “evil,” have become a gambling element for desperate and ignorant humanity.

… If one person gives another money or goods out of charity, his generosity does not yet plead for his goodness. Usually, it is given with a certain purpose in mind like most religiously related institutions do, they give the recipients with an eye to convert to their faith because they say “Jesus/ God loves all people.”

Thus naive people are tactically kept stupid and taught a religious fairy tale by the descendants of the murderers of their ancestors and by the progeny of the people collaborators within their own ranks.

But truly respecting and offering help to his fellow-men involves “total destruction and burning in all religious books and worldwide banishment of religion” so that all the evils ever created by evil people using their criminal fabrications Bible, Quran, Torah, Bhagavad-Gita, Tripitaka, Sectarian creations, etc., all become things of the past.

Also do not underestimate the spiritual murder by that religion on her own believers, and especially how they deal with it later. They are liars, hypocrites, and money wolves.

… Their nonexistent God is still on their side after all these centuries of terror. What kind of a horrible God is that?

As humanity has acquired more knowledge of life and has mastered nature, the more it stirs up the realization that religion must disappear forever worldwide.

It is unbelievable but true that people still go to that church and mosque, people who have all gone to school and learned to think independently.

… World history has clearly shown that Jesus Christ was not a believer. He was a Gentile who stood up for exiles and for the poor people of the time who had to seek salvation in Helios.

… If that Jesus still lived, he would undoubtedly have wiped the entire Vatican clean. He would also have immediately sold all the precious art treasures present and all the buildings and distributed all those billions raised plus all their inherited wealth among the starving Christians in the world.

… The excess of splendor in Rome is a model for the decadence that is deeply hidden and camouflaged in the brains of all those prelates who in reality must be their “religious” motive and show off the wealth of another, so to speak, to serve their God of true love.

… They (the Vatican and associates) know better than anyone how many deaths there are in the world right now, likewise Roman Catholic believers who cannot yet buy a handful of rice.

… The people who still believe in that religion, directed from Rome, cannot or do not see this reality, most of them have been enslaved since childhood and therefore know no better.

… What injustice the Roman Catholic Church has deprived and continues to do to the poor people of the world with their arrogant, flea and brocade-clad cardinals and all its other richly decorated prelates with all their world travels and their well-to-do life is criminal, unearthly, and disgusted.

I still can’t understand what genes others have and I don’t, which seem to necessitate some sort of deeper need to believe in some religion.

Neither am I blind to what faithful humanity has wrought in all kinds of religions for misery in the world. Hypocritical humanity never stops talking about Islam to specify its atrocities, but one must also view every belief in the same way.

… Many pretend that the belief of the Dalai Lama and the Tibetans is such a fantastic thing, but those who have studied the history books will soon realize that it was an excessively violent belief and will once again show its true form.

… Not only were large parts of China overrun by the Dalai Lama faith, but it was so bad around 1920 that Tibet was the only country in the world not to be admitted to the Nations League of Nations.

And fools live in the Vatican, famous for the wisdom they stole from the oppressed and poor people through the ages. Some wear the clothes of the poor people, while they are wolves inwardly and eager for the flock of another.

To prevent even more iniquity, I hereby call on the Vatican to disband because it has deceived the world for more than 2,000 years.

… Once upon a time, there was an honorable Pope named Albino Luciani, John Paul I. At the time, he genuinely wanted to tackle the Vatican cesspool and sell the possessions of the Church, including the entire Vatican City, with the proceeds to support the poorest people in the world.

… In this way, he wanted to make up for something for deprived mankind and his descendants. The majority of the Vatican was furious when she heard his plans.

… Not long after his revelation, they found him dead, allegedly died of a heart attack. His pontificate lasted only 33 days in 1978. To prevent an autopsy on his body from being performed to determine the exact cause of death, his body was immediately embalmed.

… In fact, as is customary with the Muslims, the RC arbitrarily applies Sharia law to its followers, “if you become a renegade you may be murdered.”

It is no wonder that this death rule is decided in Islam, simply because the Quran is an extract from the Bible.

… Because of the evils and inhumanities inherent in all religions, I consider all religious people, except for the innocent young children and those forced into religion, as accomplices of genocide and all manner of human rights violations on behalf of their merciless, cruel and non-existent god.

… There is a terrible curse on all religions and on its sympathizers so that they will never be okay as long as they consider their religion a part of their life.

… Hence, the religious people with their religion will soon be wiped out forever from this earth which they must regard as their destiny and the will of their evil and self-made God.

Who wants to achieve world peace, harmony, equitable distribution, and equal rights for all people, has to restart with a clean slate.

… One should not wait for the one who first puts his armor on the ground, but by shedding his own religious courage with respect for everything that nature has ever produced and still produces as the creator of everything that has lived, lives, and Still have to live.

Nature is the creator of life. Honor to those who deserve the honor.