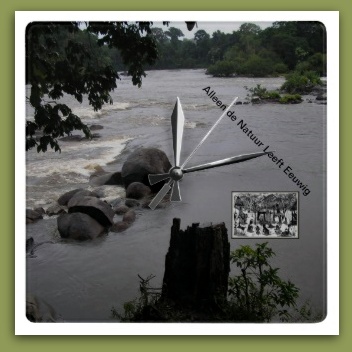 Nature created man and man created God in his image.

“Everything is written in the Bible, Quran, Talmud/Torah, Bhagavad-Gita, etc., but nowhere does it say: “This book is a man-written, twisted summary of the past folk histories, encompassing the methods, philosophy, and fictions of past imperious, evil, and insane people.”

The Bible and all other religions contain the fantasy of evil humanity. This also means that the Quran and others are extreme extracts from the Bible and the Torah, based on these two fantasies and supplemented with comparisons by the authors.

… The only difference is that it is drafted in Arabic and other languages with their vernacular touch on ideology, philosophy, and inscriptions of the plagiarism.

… And this spiral of violence of horror and inhumanity by the Gods as outlined in their sacred books, is practiced by religious humanity to this day.

… The students surpass their master because religious humanity now emphatically surpasses the past horrors and violence at the hands of their God.

So Satan, God, and Allah are one and the same

… It doesn’t matter which God ends up behind bars, because this compilation also applies to all other worldly Gods that mankind has made up in the past centuries.

… Get rid of all religions, they are religious robbers’ nests! This is mandatory brainwashing.

“Only nature lives eternally, which is the source of all that lives and that one can see and cannot see. Nature is the creator of life. Glory where Honor is due.”

“I was looking for God and suddenly saw him standing with a staff in his hand. I snatched the staff from him and pushed him into the jail with my stick.

… God is defeated by the power of nature, he cannot fight against it, for nature is stronger and mightier than all the gods put together.

… So, this is the symbolic eternal punishment I have in mind for the fictitious ideal God of evil religious humanity.

God is in reality the evil religious humanity; therefore this symbolic punishment is due directly to the earthly followers who have written down their evil ideas and who have been called Bible / Quran / Torah / Talmud, Bhagavad-Gita for centuries and consider these evil scriptures as their guide.”

“The beast is in man and man is the beast.” 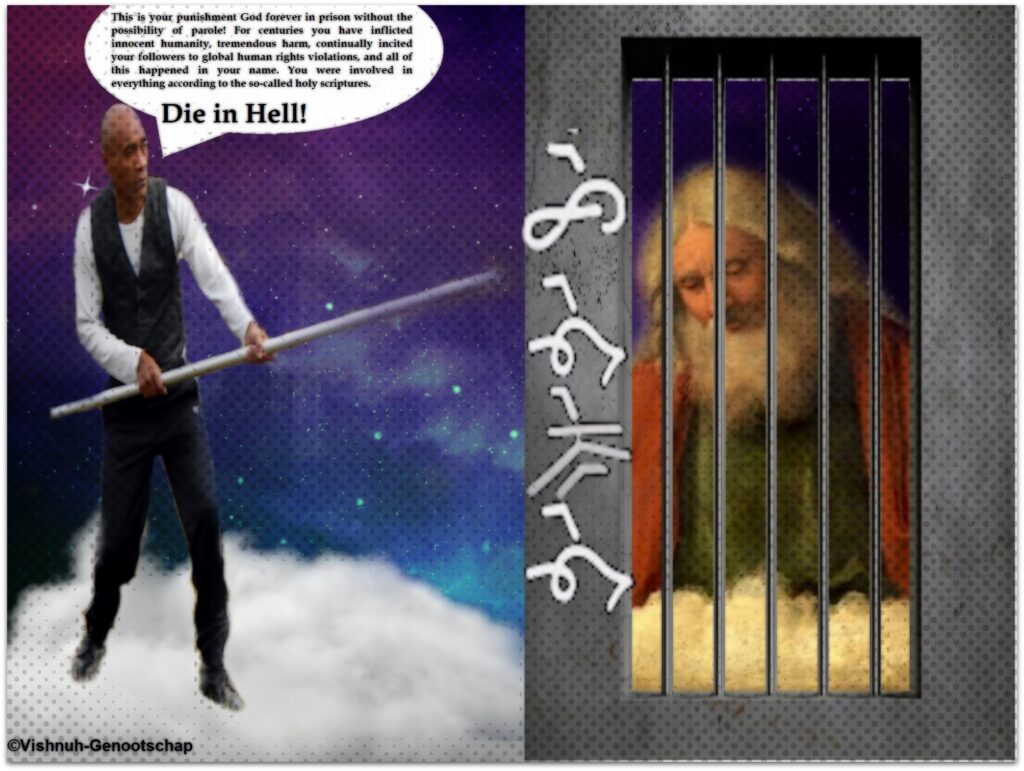 God is now where he belongs, behind bars, in the prison of eternity

The Bible, Quran, Bhagavad-Gita, the Mishna, and Talmud are united in the Torah, and all other religious scriptures are the books of damnation!

… But Wisdom is hard to find in those books concerned.

… No one has become wise by chance, for wisdom does not come from the East, West, South, or North.

… Nor can man learn wisdom from so-called holy books, but wisdom is born from the one who is honest with himself and with his fellow man.

… Only the lie has different versions, hence the different religions and scriptures.”

Read and Shudder along

… People who sympathize with Arabia, its customs, and Islam, are in fact barbarians because those who handle pitch become infected with it.

Everyone is free in what he/she wants to believe, but keep that religious nonsense to yourself and don’t force it on others.

… There are preachers who proclaim so-called moderate Islam and tell all kinds of nonsense to justify their Islam.

… But never be fooled by these kinds of Imams and Mullahs, not even by your supposedly pious family, father, mother, brother, sister, uncle, grandfather, or grandmother.

… These are all parrots in human form and only act as a conduit for Islam because moderate Islam does not exist.

… There is one Quran, and there is one Islam, which is evil in the name of Allah. The same goes for the Bible, Bhagavad-Gita, Torah, etc.

The Talmud is one of the most important of all books in Judaism after the Torah.

… The Talmud covers every aspect of Jewish life. Everything from what Jews wear and say, to how they act and treat others.

The Talmud states that non-Jews should be treated like beasts.

… So regardless of whoever, a non-Jew is less than an animal in their eyes with which they can do whatever they want according to their holy books. This is the worst nation, followed by the Muslims and the Christians.

The Talmud is a hate-filled book

Coschen hamischpat 405. “A pregnant non-Jew is no better than a pregnant animal.”

Sanhedrin 57a. “A Jew need not pay an Infidel for the wages he owes him for work.”

Ereget Raschi Erod. 22 30. “The Akum (non-Jew) is like a dog. The scriptures teach us to give more honor to the dog than to the non-Jew.”

Schene luchoth haberith, p. 250 b. “Although the Gentile has the same physique as the Jew, they relate to the Jew like a monkey to a human.”

Sepher Ikkarim III c 25. “It is permissible to take the body and life of an Infidel.”

Sanhedrin 55b. “A Jew may marry a three-year-old girl (specifically, three years and one day old).”

Sanhedrin 54b. “A Jew may have sex with a child if the child is younger than nine years old.”

*So not only do Christians, Muslims, Hindus, Mormons, and other religions promote their Satan, but Judaism, too, may join this religiously traditional line of abomination and inhumanity! *

All heads of government leaders, governments, and civil society organizations that promote, defend, or favor Judaism do so with malicious intent.

… They are not for the bourgeoisie and the common good as they usually promote, but they are out for their own benefit over the corpses of their citizens and fellow human beings.

… They put out a fire that cannot be extinguished, which is equivalent to carrying water to the sea. Pay close attention and look at the world around you.